While the SCFI spot rate index appears to be reaching a plateau, the CCFI contract index continues to climb. In issue 499 of the Sunday Spotlight, we took a closer look at the pivotal Asia-Europe and Transpacific trades, to see whether the current developments in the contract rates are aligned with recent spot developments, as well as what to expect going forward.

There is a high degree of correlation between the SCFI and CCFI on Asia-Europe, peaking at a 3-week time lag, which essentially means that with a 95% correlation, the SCFI is able to predict the CCFI contract index 3 weeks into the future. This in turn means that the contracts being negotiated are heavily influenced by the prevailing spot rates. This also means that over the coming 3 weeks, we should expect to see the contract rates flatten for cargo to the Mediterranean and decline slightly for North Europe.

On Transpacific, the 10-year long-term correlation between SCFI and CCFI is relatively less clear, but looking at just the past 24 months, and with a lag time of 3 weeks for US West Coast and 4 weeks for US East Coast, we find the correlations to be very strong, at 96.4% to US West Coast and 95.1% to US East Coast. Our predictive model shows that while the CCFI index developed well in line with the model indicated by the SCFI, maintaining the same market correlation as in recent years, there was a clear deviation in December 2020, with the contract rates moving above the expected SCFI levels. 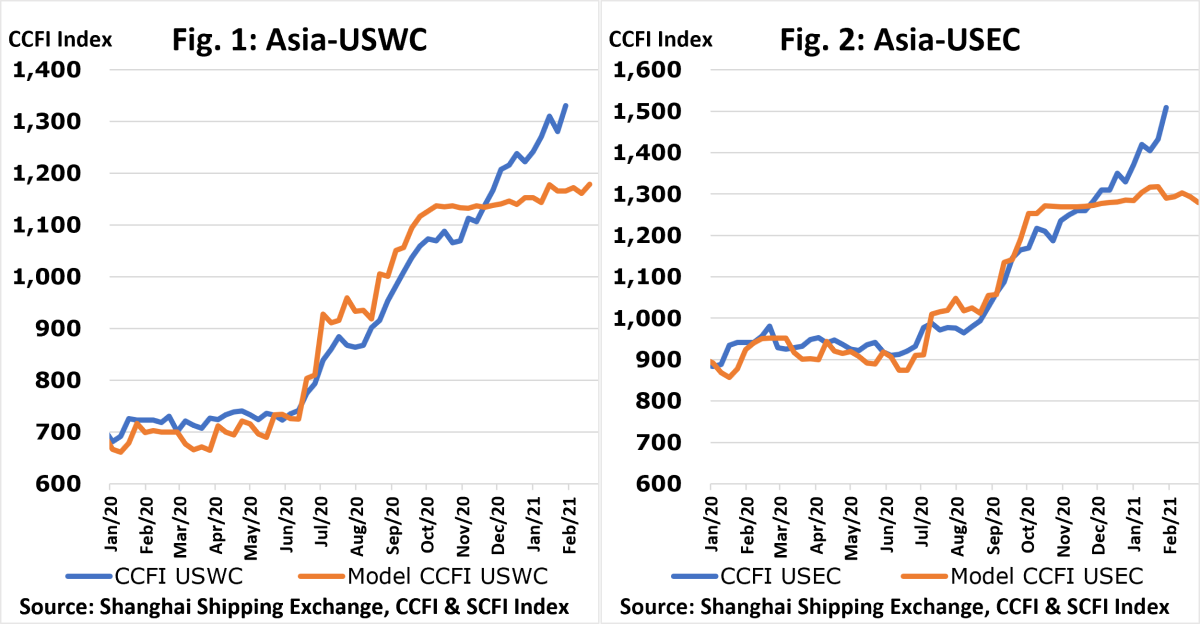 The spot market developments would normally have led the contract rates to level out, as we have seen in Asia-Europe – however, as it is clear from figure 1 and 2, this did not happen for Transpacific. What we have seen instead is a continued increase in contract rate levels. For both Transpacific trade lanes, we are now at a point where the contract levels are 15% higher, than what would be expected based on the spot market developments.

While it does appear that the contract rates presently are overshooting the mark, compared to what would be indicated by the spot market, they would also be overshooting in terms of reversing the level shift of 2016, but fundamentally supporting the notion of a more permanent upwards shift. Or to put it very simply, from a shipper perspective: prepare for permanently higher contract rates on the Transpacific, but also that the current levels right now might have overshot the mark.

Sea-Intelligence ApS
Vermlandsgade 51
2300 Copenhagen S
Denmark
This email address is being protected from spambots. You need JavaScript enabled to view it.